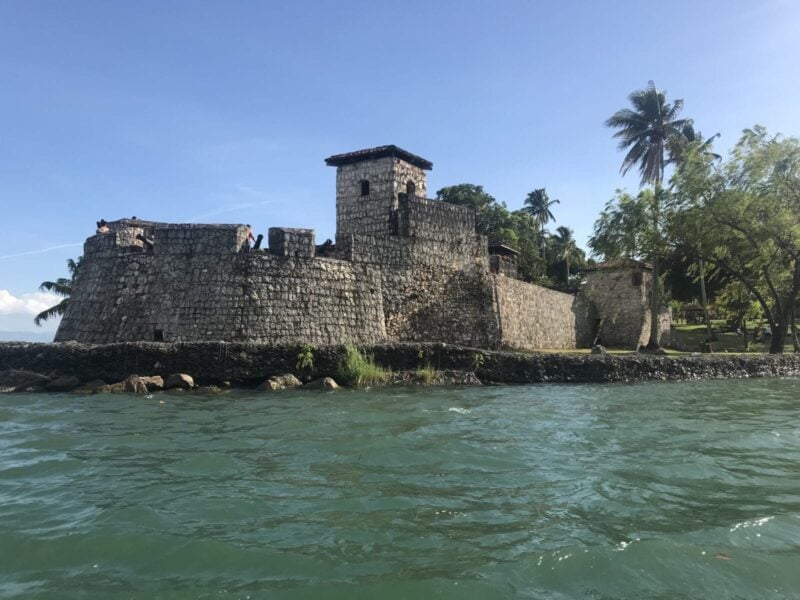 Planning to spend your next vacation in Guatemala?. Do not miss a tour that will take you to the ‘Dulce River’ and this castle. It will certainly remind you of the Medieval Era when you spot it in the distance. A stone fortress linking Lake Izabal with the Dulce River. Since it is located precisely at the mouth of both, is in other words an impressive and majestic part of Guatemalan history.

San Felipe Castle Guatemala
The castle was built in the 16th Century to defend ships from Spain that brought cargo to Guatemala. Since the ships that entered through the Golfo were assaulted by pirates, the King of Spain ordered the construction. Therefore the castle served as a fort to defend ships. In addition, it also served as a dungeon for captured pirates.
In ancient times this fortress led battles against pirates of the Caribbean and as a result, it was restored many times after a confrontation.  As in the movies, the pirates used to attack with their canons, and the fort defended with its own.

What was then a defense fortress is now a national monument, preferred by travelers on their Guatemala vacations. Known for its eras of pirate battles, San Felipe Castle is worthy of any adventure film.
Fascinating History

In the seventeenth century Guatemala and Spain maintained a good commercial relationship for the exchange of merchandise. Although its origins date from the fifteenth century. The boats left the coast of Spain throughout the Atlantic to enter the Gulf of Mexico. Their final destination was Lake Izabal where the warehouses that kept the merchandise were.

At this time, many pirates used to meet on the high seas and took advantage of the ships that left Spain with merchandise to dock them. When the situation became too hostile, the governor informed the king of Spain. So, he ordered the creation of defense towers in order to defend the ships.

As the attacks continued, they ordered the construction of the fort. With the passing of many years ended up being the impressive construction that is the Castle. For more than a century it was a defender of many pirate attacks. It was fortified with watchtowers, squares for guards, walls and war canons. Its full name is Castle of San Felipe de Lara. It is because the King of Spain Felipe II ordered its construction together with the oidor Antonio de Lara, who was the designer of the building.

The designer ended up baptizing it in this way.
In current history, it is in charge of the Guatemalan Tourism Institute. It is on the UNESCO tentative list of World Heritage for Humanity since the year two thousand and two. Curiously, such a building is found on this continent. At first glance, constructions from the Middle Ages of Europe never cease to come to mind. The work is very similar to the castles that you have seen only in movies or if you have visited the cities of the Middle Ages of the old continent. In fact, in America the only similar work is the Castle of San Felipe de Barajas in Cartagena.

A must while in Dulce River, Guatemala
While being in Rio Dulce, you must join a tour of this work in. The San Felipe Castle Guatemala represents the history of the lowlands. It is one of the main tourist destinations in the country. For its age and its walls keep memories of centuries in which epic battles were fought. The itineraries that visitors usually take include other very beautiful destinations such as Semuc Champey and Dulce River, and then arrive at the Castle.

During the tour, guides will give you a brief explanation of how the fort works in ancient times and what each of its environments will be used for. Enter its towers and balconies, passing through the entire fort. See the area that was used as artillery, the war cannons with which the fort faced pirates. Also visit the area that was used as a dungeon to hold the captured.

Boat tour of Dulce River and San Felipe Castle Guatemala
A very pleasant boat tour that can take you all over the river. Enjoy the scenery until you reach the mouth of the biggest Lake in the country, Lake Izabal. Boats will surround the castle so that you have the best view from all its angles. Admire it in all its splendor and be able to take the best photographs.

Due to the tourist destination that means the Castle of San Felipe, find very good options of very comfortable hotels nearby to make your visit pleasant. Visit restaurants with the best cuisine and gastronomy of the river and the Caribbean.