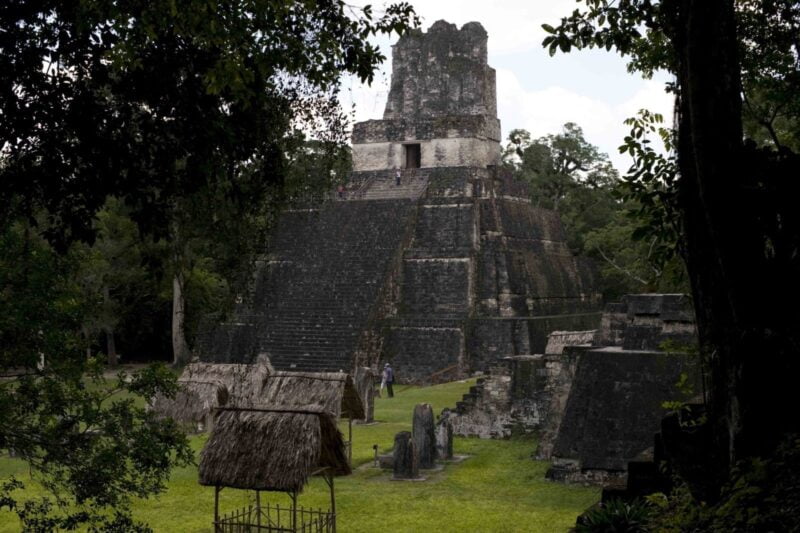 Experience the grandiose temples of Tikal on this one-day excursion. A captivating journey to the towering jungle M-ayan ruins, this excursion treats you to a private archaeology guide and plentiful wildlife viewing opportunities. The impeccable extension to begin or end your Guatemala vacation, Tikal is absolutely a must-see. Visit the amazing milestones in the history of Tikal and the Mayans during a sunrise and sunset tour.

A journey to discover Tikal, where you will enjoy the history of bushwhacking through the jungle with tree-gum collectors to stumble across the overgrown pyramids. You could pick any incredible historical period to learn; after all, you have got a private archaeology guide.

Temple of the Jaguar

Temple of the Masks

A full day of Mayan exploration. It will certainly be a wonderful time to learn about from your guide, as Tikal was so important in the Classic Mayan Civilization as the collapse of the Mayan Empire shortly followed its abandonment.

Your guide will collect you from your hotel or Mundo Maya International Airport and transport you into the thick jungle of Guatemala’s most famous cultural and natural preserve, Tikal National Park, a UNESCO World Heritage Site. Here you will begin this unforgettable Tikal tour. Accompanied by a knowledgeable and certified guide, you will start the exploration of the archaeological ruins, 341-square-mile park. This experience in Tikal is like traveling back in time.

Your expert guide will show you the layout of the temples, architecture, history, and some theories of why they disappeared. There are hundreds of buildings and other Mayan structures, some of which rise above the jungle canopy. Since you will be in the jungle, there will be plenty of opportunities to spot monkeys and tropical birds, abundant in the surrounding forest.

Afterward, you will enjoy lunch at a restaurant in the middle of the jungle on site. Later, you will come back to the park to continue exploring more, and to contemplate the lights of the sunset illuminating the temples in gold. Finally, your private transportation will take you to the airport or transfer you to your hotel.

If you can start early, you will hear monkeys, parrots, macaws, and toucans making a symphony of sounds simultaneously as the sunlight comes up. This experience alone is worth the trip to Guatemala.

You will hike for about 45 minutes until you come across Temple IV, which is the highest temple in Tikal. You will climb to the top of the 230 feet pyramid, this is the best place to contemplate the sunrise. At this point, you can still only see about a few meters in front of us, but the symphony of sounds will make up for it. You’ll sit speechlessly and listen to the jungle wake up, toucans, spider monkeys, and howler monkeys all make sounds as the sun will fight an ongoing battle with the clouds. It will be the most magical moment of your trip, but wait, the best is yet to come.

As if someone pushes a button, the fog starts to lift. Continuously it turns from heavy clouds to fragile wisps, then rises from the canopy and burns off quickly. Gradually your visibility will increase, and suddenly, you can see a magnificent temple poking up through the jungle! And then another, and another. You’ll have no idea that any of them are there. It will be like putting on glasses and abruptly seeing the world differently. All of Tikal will be revealed to you.

Not included: flights, personal, travel insurance other expenses than indicated