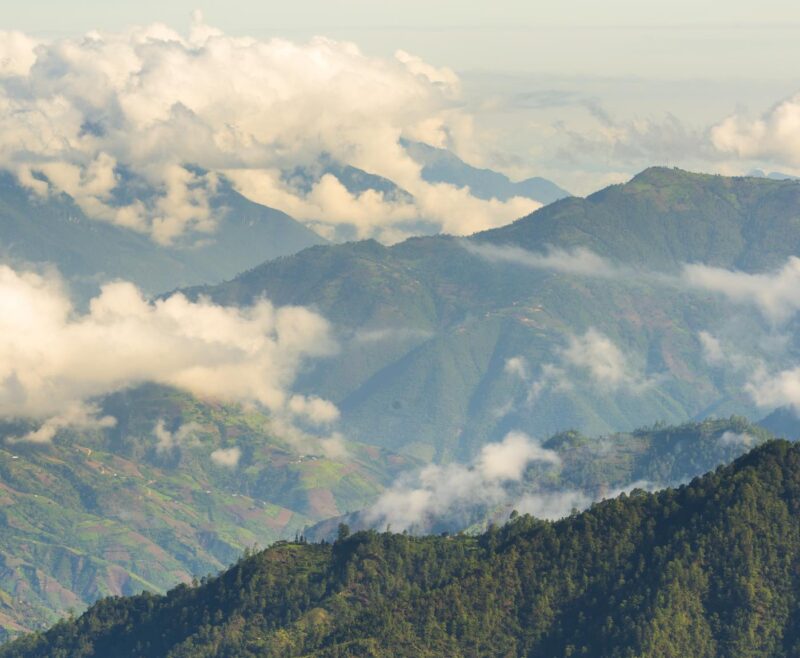 If you travel to Guatemala, you must visit Todos Santos, a small village hidden high in the Mountains of  ‘Cuchumatanes’. Guatemala is a mountainous country with no shortage of dramatic mountain ranges. The Cuchumatanes, however, are in a league of their own; stretching up to 12,500 feet. They are the highest non-volcanic mountain range in Central America and a sight to behold.

These mountains rise from skirts of humid jungle. That gives way to pine forest as they climb upward; near the top, the trees thin into sweeping grasslands, shrouded in cloud as often as not.

Todos Santos Guatemala
There, in a steep valley parceled into fields for subsistence farming, is the Mayan community of Todos Santos. The men wear traditional Mayan Costume; the most striking feature is their red and white striped trousers. If a man is married, he wears a pair of shorts over his trousers. Married and unmarried men alike also sport hats, traditional shirts, and colorfully embroidered jackets.

Todos Santos Guatemala is quiet for most of the year – it is as quaint as it is isolated. A Mayan community that forges on without the money and attention that come from being a tourist attraction. At least once a year, however, Todos Santos plays host to a do-not-miss event. It’s the village’s fair, or annual festival, which takes the form of a drunken horse race on the day of the dead.

The story goes like this
When Guatemala was conquered by the Spanish, the Mayan villagers of Todos Santos Guatemala were introduced to horses. They quickly became adept at riding, and were revered for their skills across New Spain. The Spanish disapproved, however, and forbade the men of Todos Santos to ride. So, in protest, the villagers established a horse race during their fair that is still happening some centuries later.

Although the Mayan population is nominally Catholic, the version of Catholicism that they practice is syncretic. One with considerable holdovers and infusions from traditional Mayan religious systems. Some still believe that the corns and vegetables of their labor are at the mercy of not just the weather but the Mayan deities and Catholic saints who might intercede on their behalf.

The Traditional Fair – a local celebration.
In keeping with that belief, the fair, which falls near the end of Guatemala’s wet season, is meant to please those spirits above. A couple days of hard drinking precede it; by the time the sun has risen on November 1st, many of the men are very drunk, stumbling through the dusty streets of the town. Tourists and foreigners pour in to watch them. Horse riders festoon themselves in colored ribbons, climb atop their horses, and ride as fast as they can back and forth down a short track of dirt.

It is not a horse race…
It isn’t a race, per say; sometimes a pack of horses will take off, and sometimes only one, and sometimes a horse without a rider. There are no officials with pop-guns or timed starts, and there is not much concern for who finishes first or last.

The main business is to showcase the men, stone drunk, riding and whooping without their hands on the reins. Falls are common and ugly – sometimes, injuries are serious. Deaths are not unheard of – they’re believed to bring rain in the rainy season to come.

The mayor of Todos Santos Guatemala banned the sale of alcohol in 2008 to try and curb the festivities. So far, no dice. In 2016, the festival was in full form, with many small shops openly selling alcohol to the throngs who had come out to see the race. If you travel to Guatemala on All Saint’s Day in the future. you owe it to yourself to come out and see the madness yourself.

Mayan Traditional Costumes
Todos Santos Guatemala is one of the few towns in the country that retains the use of typical costumes among the indigenous population. When you travel to Guatemala and visit the town of Todos Santos, you will notice a good percentage of locals who wear the very particular and picturesque typical costume of this place.

The typical suit of the man highlights the use of the trouser envelope and a type superimposed underpants color, dark red and white with stripes. A colorful straw hat and a wool jacket complete the outfit. This costume may vary slightly depending on the village. The women’s suit is very special too, they wear a red and white striped skirt, in addition to a very colorful embroidery.

And for the traditional celebration “The Fair”…
For the town fair the locals like to wear their best clothes. See in the small streets of the town as adults and children walk exhibiting their typical costumes. Riders wear the best finery, apart from the typical costume, they add colorful vests, scarves and the most colorful hats. These riders participate in a Mayan ceremony. Their costumes are embroidered and hats made from straw and feathers and with these same costumes they enjoy the party.

Already drunk they defy death by participating in horse races… The town of Todos Santos is a clear example of the traditions that are still alive in Guatemala. In this case representing an indigenous ethnic group and Pre-Hispanic America.

Best time to travel
The best time is in the months of November to April, which is when it rains the least. The town is forty-four kilometers from the municipality of Huehuetenango and one hundred and thirty-one kilometers from Quetzaltenango. And for the fair of the place that is most attractive to travelers and its particular celebration of the first of November, All Saints’ Day.

The Trek…
The walk begins in the town of Nebaj, heading towards the mountains. During the three-day trip, you will hike through beautiful mountain scenery. Today ends passing through picturesque villages to rest. The third day you will camp at the top of the mountain range, since one of the satisfactions is to reach the top of the highest mountains in Central America. At the end of the walk, arrive at the town of Todos Santos Guatemala, it is an excellent way to get to know this picturesque town.

What to do in Todos Santos
In the town and its surroundings there are different accommodation options for small hotels and hostels. Typical gastronomy of the town is a very good option. Local dining rooms offer you typical and delicious local dishes. Crafts for sale are also attractive to visitors. The fair is highly anticipated throughout the year, very colorful due to the costumes of the locals, horse racing and very particular riders.
See our fantastic Guatemala tours here.