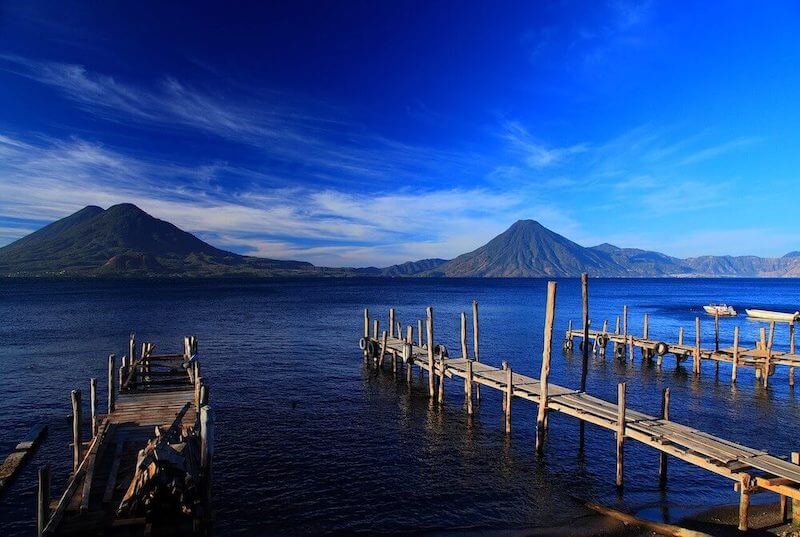 A dozen bakeries of Mayan villages surround this lake. Bustling and distinct from one to another. The villages on the north side of the lake speak a Mayan language, and those on the south side speak a different one. Many of the villagers still wear traditional Mayan garments, with patterns and colors particular to their respective villages. Are you interested in seeing the living Mayan culture?. If so, there is no place like this to do so!

Discover these azure gem, a place from a story book or a fantasy.

Antoine St. E. wrote The Little Prince after resting in a hammock here. Aldous Huxley, author of The Doors of Perception and Brave New World, said that it was “really too much of a good thing”. Flanked by three massive volcanoes, alive with hummingbirds and fireflies. The lake has an air of fantasy that is hard to shake.

Lake Atitlan sits in the crater of a massive volcanic eruption that rocked Guatemala 85,000 years ago. The eruption was some 270 larger than Mount St. Helens in 1980. It was so large that the roof of the magma chamber collapsed, creating the bowl of rock in which the lake now sits.

Expats from around the world have settled at the lake, and have helped in turn to lend the better-trafficked towns distinctive flavors. Smaller villages around the lake also offer unique experiences.

Secrets of the Lake
The lake is surrounded by steep cliffs from which a number of small streams drain. It loses some water to evaporation, but no major channels drain out. Scientists do not know very well yet the way in which water leaves the lake. The best explanation is that a network of underwater cracks provide drainage.

Sometimes, the water falls unexpectedly; and sometimes, it rises dramatically. In 2010 and 2011, the level of the lake rose 17 feet in as many months. Vacation properties and entire neighborhoods on the shore of the lake were submerged wholesale. Local Mayan villages, which are for the most part built farther up the hill, fared better. That is because the Maya, from experience, know that Atitlán rises and falls.

There is more to Lake Atitlan than described here – the lake is rich with secrets. There are hidden waterfalls, cigar-loving effigies of Catholic saints, half-finished castles in the shape of a dragon, zip lines over nature preserves, ramshackle bookstores on the edge of drowned neighborhoods, and much more!

Believe us! If you are planning to travel to Guatemala, you must see Lake Atitlan. It is very important that you explore it in person. Travel to Lake Atitlan and discover this natural wonder!

These are some of the most popular towns to visit:

Panajachel
Is a transit hub, just down the hill from the municipal capital of Solola. Where you can transfer from bus to boat, or peruse crafts and fabrics from the vendors lining Santander street.

San Juan La Laguna
This little town is home to a community of painters and artisans.

Santiago Atitlan
Is recessed on a bay with garden-like lakefront properties, a classic town square, and a beautiful Catholic church with a rich history.

Santa Cruz
Take diving classes at a dive school in this village. Instructors might take you to the bottom of the lake, where trees and buildings from Mayan villages of centuries past endure, shrouded in silt and algae.