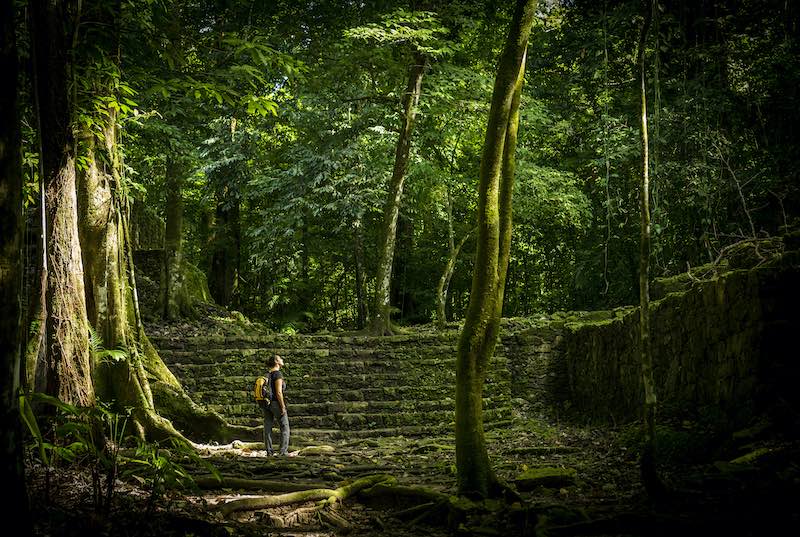 During the jungle trek to El Mirador, you will hike for 5 days in the jungle. You will go through the rainforest to diverse ecosystems and monumental sites of The Mayan Kingdom of Kan, “The Snake Dynasty,” on this jungle trek. Presently, there is no excavated ruin more isolated, more secluded, more truly lost than El Mirador.

The reward for those travelers who make the trek is glorious – an opportunity to observe the most extraordinary jewel of Maya culture. The payoff for those who make the trek is sublime. It is a chance to see one of the most impressive gems of Mayan culture with sophisticated structures, such as La Danta pyramid. This pyramid has a volume of 2.8 million cubic meters and unique architectural designs. It has the biggest known pyramid in the Maya world in terms of volume, by various calculations, and virtually the size of the pyramids in Egypt.

Meals: All meals during the duration of the trek, purified water, and a cook

Entrance fee for the archeological site

Not included: flights, travel insurance and other expenses than indicated

For the majority of adventure travelers, this type of deep-seated, off-the-beaten-track unique excursion is Guatemala at its best. In this huge National Park, the bird watching excursions are dedicated to spotting and photographing not just macaws but hundreds of other aerial species found in and around the reservoir, counting red-capped manakin, red-legged honeycreeper, and long-tailed hermit. Duration from: 2 days. Price per guest from $380

Guatemala is acclaimed because of its lagoons, lakes, and natural pools. But the Blue Crater is the top of the heap. So immaculate, so crystal that is unimaginable. Explore this magnificent natural reservoir in the northern jungle canopy of Guatemala and swim in submerged garden heaven known as the Blue Crater. Sensation at the deep blue crystal pure lagoon water and underwater plant ecological community, a maritime heaven experience in the jungle. Duration: one day. Price per guest from $150

Guests will go through nine platforms in this cable circuit that winds through the biggest trees. You will float past exotic birds, delightful scenes, and unbelievable wildlife on this enchanting experience that holds your safety and pleasure into account always. Before the tour comes to an end, guests will have the opportunity of riding a horse or tractor through the plantation before having lunch and some free time to relax. Duration: half day. Price per guest from $40

This Mayan site is the third-largest in Guatemala, just behind Tikal and El Mirador. It is all the same time, quite off the beaten track and so contributes to bringing smaller groups than other Mayan ruins. This makes it excellent for tourists who would like to have the flexibility to explore the site without any other travelers around. The dramatic ruins sit between two captivating lakes and it is situated about 30 kilometers southeast of Tikal and 75 kilometers from Flores Island. Duration: half day. Price per guest from $80